Optics and audio have general base. Both are waves (oscillations) and human perceptible with limitations in low and high frequencies.

In the article some aspects of optical processes are viewed. It may help us to understand "invisible" audio concepts as visual images. 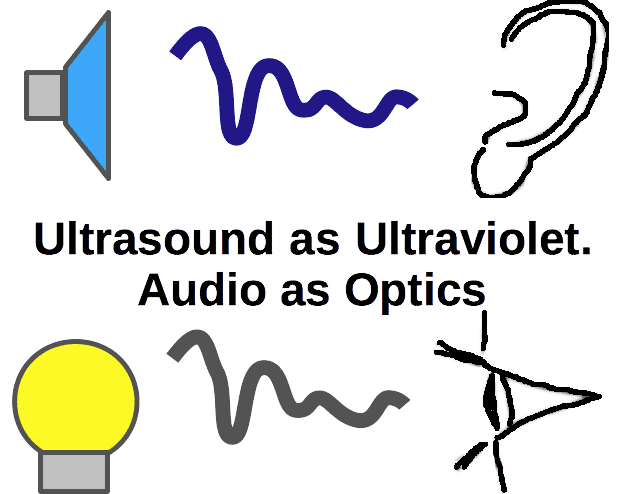 Music and other sounds we perceive as acoustic mechanical waves that move our eardrum. The eardrum generate signals that comes to our brain.

TV and other visual objects we perceive as reflected electromagnetic waves that fall to retina into eyes. The retina generate signals that comes to our brain too.

Our brain birth images according with optical and audio waveforms.

Therefore our senses receive both audio and optical objects identically in some approximation.

Any waveform can be presented as spectrum. Spectrum is a bunch of sinusoidal oscillations with different frequencies.

These frequencies distributed from zero to infinity.

Human can perceive only limited frequency range in the middle part of the full spectrum.

Super low frequencies (infrared, lower 430 THz) we can't see, but it can be perceived as warm.

Super high frequencies (higher 750 THz) we don't see too. There is there we can feel warm. Like any electromagnetic radiation.

In general case significant energy of ultraviolet is very dangerous for human.

Sometimes recording/translation of ultrasound is considered as significant part of keeping sound naturalness. Because any acoustical wave (acoustical musical instrument, voice, etc.) have infinite spectrum and contains stuff above 20 kHz.

Let me look to recording/playback of optical signal (image, optical waveform) from this point of view.

Supposably, we recorded infrared and ultraviolet to the video file and can playback it on a display.

Infrared and ultraviolet will heat our room. If we increase brightness of the display we risk to get burn of eyes.

I want to ask: what add warm sense and burn of eyes for looking video of natural flower at the display? Do ultraviolet give more "naturalness"?

Well, how much "naturalness" give ultrasound?

What may contains ultrasound in real records

If you think, that ultrasound range of audio record contains only pure music from acoustical instrument, you will, possibly, disappointed.

Recording music performed in complex electrical noise environment. Of course, recording hardware use many ways of noise suppression. But sometimes in ultrasound range of spectrum we can see parasitic harmonics, having level comparable with useful musical signal.

How impact ultrasound to dynamic range

Dynamic range may be presented as relation of maximal total audio energy to noise energy in silent mode.

Maximal total audio energy here is maximal energy that can played back without overload on used hardware.

Thus if the maximal energy (allowed without overload) is higher, then dynamic range is wider.

I.e. such system can play back signals with wider loudness range (from min to max loudness) than system with narrower dynamic range.

Wide dynamical range is very important for classical music, that may contains quiet and loud fragments in one musical piece.

There are several technical definitions of dynamic range. Our defininition here is simplified intentionally. It help to understand how ultrasound impact to dynamic range of audible signal.

For simplicity spectrum of audio signal drawn as rectangle at the picture.

Audible music spectrum: Energy of the green (left) spectrum rectangle is its area.

Ultrasound music spectrum + technological noise: Energy of the turquoise (right) spectrum rectangle is its area too.

Total energy is sum of areas of the both rectangles.

At the left part of the picture ultrasound and audible music have same energy.

At the right part of the picture ultrasound have zero energy. Thus total energy may be fully used for audible music. It cause maximal dynamic range for the audible music on used hardware.

That is optimization audio from optical point of view

One of aspects of audio optimization for Digital Analog Converter (DAC) is filtering of ultrasound. Let me illustrate how it work in optical example. 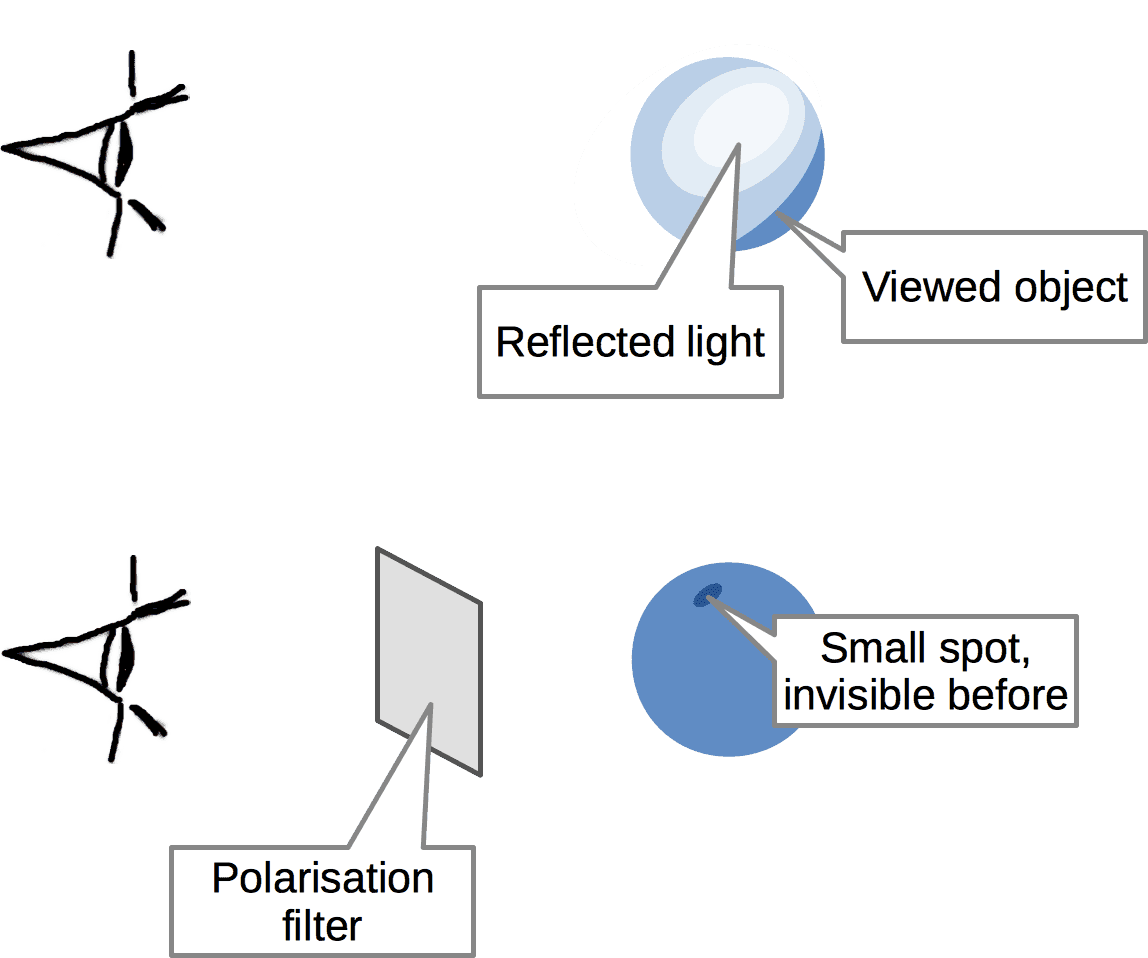 When we look to shiny object, we can see object and reflected light rays.

The rays "distract" our eyes from contemplation of the object.

The bright rays overload our retina and hide details of the object surface.

As example, small dark spot placed on the object's surface.

When we apply polarization filter and block getting the rays to the retina, we exempt dynamical range (by brightness) of our eyes. And now we can see the small spot on the object, invisible before.

From one side we lost "natural" picture that contains many reflections.

From other side we get details of the object that primarily interest us.

Of course, example with polarization filter is not fully identical ultrasound filtering during audio optimization. 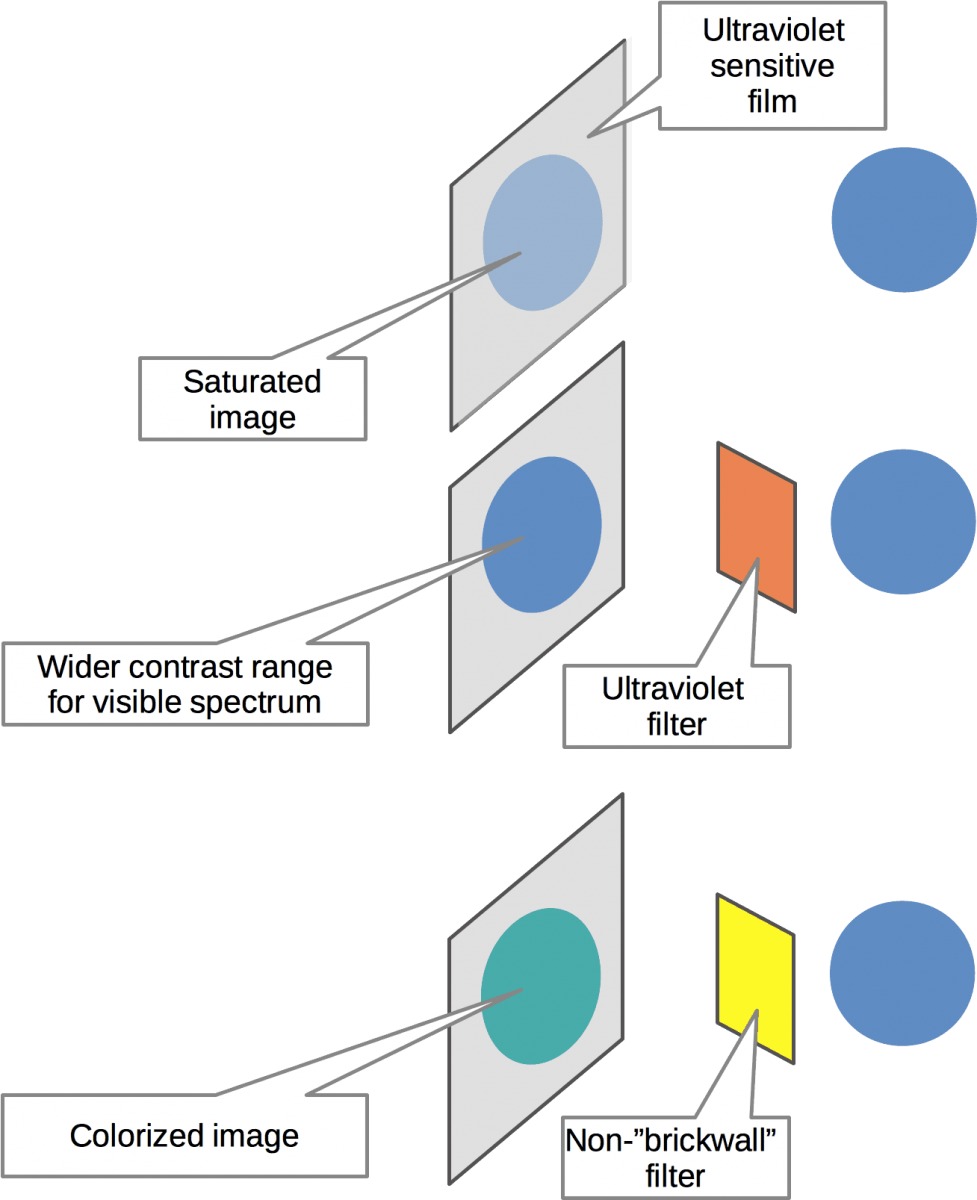 If take shot a object to ultraviolet sensitive film, it can cause saturation on the film. Despite we can see real object absolutely clear in reality.

Applying ultraviolet filter allow put on film only energy of visible spectrum. It cause wider dynamic range for visible energy. Picture on the film is not saturated more.

For using released dynamic range we can force additional backlight intensity of the object during taking shot.

If the ultraviolet filter is non-"brickwall", image on the film may have distorted colors (colorized image) or part of ultraviolet spectrum will cause saturation.

1. Ultraviolet and audio have same base - waves. It allow show audio phenomena in visual images.

2. Very strangely to ask TV display radiate invisible ultraviolet for "naturalness" of a picture. But it is almost normal in audio.